The Creator is said to have created the globe with great patience. This is particularly true of an island on the other side of Africa. Zanzibar is sometimes wild, sometimes gentle and that’s precisely why it is full of surprises and secrets. The green dream in the Indian Ocean shows two islands that belong to Zanzibar on the maps. The locals call the most important of the two Unguja, the smaller one is called Pemba.

It’s just forty kilometers to mainland Africa, and hardly more than six degrees to the equator. Zanzibar is something of an outpost of Tanzania, and those who vacation there just for the picturesque beaches are missing out on a lot. Despite the sun and sand, you should look around a country where Europeans, Indians and Arabs have been doing lucrative business for centuries. A certain Sultan Said al Busaisi of Oman achieved two things in the 19th century: He made the island the spice hub of the world and at the same time he pushed the slave trade.

In the following we present you the most exciting tours, the most beautiful attractions and the best sights on Zanzibar. 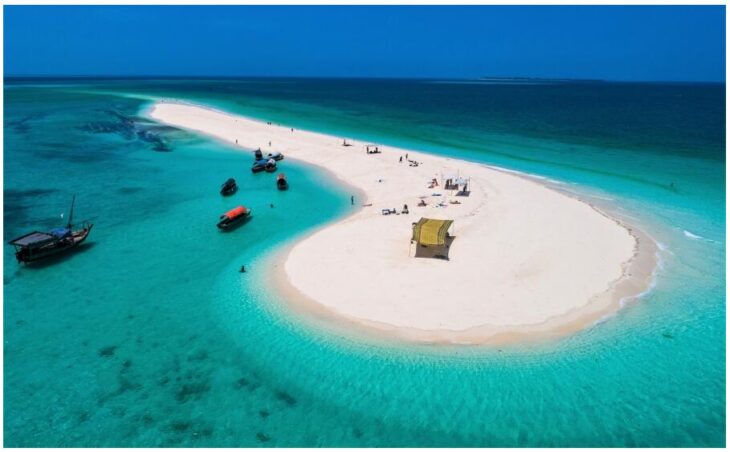 The visitor quickly recognizes what the “stone city” is all about. The houses of Zanzibar City were built almost exclusively with stones that come from the sea mountains. In other words, from those coral reefs on the island’s doorstep where polyps no longer live and have therefore died. Stone Town is on the UNESCO World Heritage List.

However, few of the city’s historic buildings have recently been restored due to a lack of money. Nevertheless, a stroll through the winding streets with their small shops is worthwhile. One of the central points of Stone Town is the Darajani Market with its stalls selling fruit, vegetables and fish. Other sights include the Sultan’s Palace and the old fort, where an open-air theater for concerts has now established itself.

The island of Changuu is actually only known to the residents as “Prison Island”. It is located about five kilometers from the coast and has a rather gruesome history. The first Sultan of Zanzibar gave the tiny spots in the sea away to Arab slave traders. The proportion of slaves in the total population of Zanzibar was at times around seventy percent.

A prison for criminals was established on the island in 1893, but was later used as a quarantine station when there was a threat of a yellow fever epidemic in neighboring Stone Town. Today Prison Island with its beautiful beaches is owned by the government. Numerous Aldabra giant tortoises live here in a fenced off area.

3. The house of miracles

The so-called “House of Miracles” in Stone Town was once used for ceremonies by the Sultan of Oman. In the 19th century, the Sultan and his entire court moved to Zanzibar. This was the first structure in the entire East African region that had electricity. There was even an elevator there. That is why the “House of Wonders” got its unusual name.

Today the building with its impressive facade and three floors houses a museum of culture and history. The House of Wonders in Stone Town also found a place on Zanzibar banknotes in illustrations. The Forodhani Gardens, which surround the former palace of the Sultan, are among the most impressive and beautiful oases in the town.

The Mnemba Atoll Marine Park is the most important and famous marine reserve on the island’s maritime front door. Divers and snorkelers appreciate the fascinating underwater world with huge stingrays, lionfish and moray eels. This atoll consists of a seven by four kilometer reef where the corals have shaped the island of Mnemba over the centuries.

Encounters with turtles and dolphins are almost everyday here. The underwater visibility in the atoll is exceptionally good, reaching up to thirty meters. Most providers include snorkeling equipment and a delicious lunch. A real underwater paradise awaits you!

The rock restaurant is certainly one of the most unusual gastronomic destinations in the Indian Ocean and, due to its location alone, is one of the island’s most important attractions. It is completely enclosed by the sea and is located on a rock. If you want to dine there, you have to put yourself in the care of a boat guide, who then transports his passengers to the Blue Lagoon.

In the Rock Restaurant, fish, which the chefs prepare in all variations, is of course always absolutely fresh. Often it is even delivered directly by the fishermen in the early morning hours. The specialties of the picturesque restaurant in the ocean include grilled lobster, boiled octopus and pasta with seafood. There are only a few tables that can seat 14 guests, so reservations are recommended. 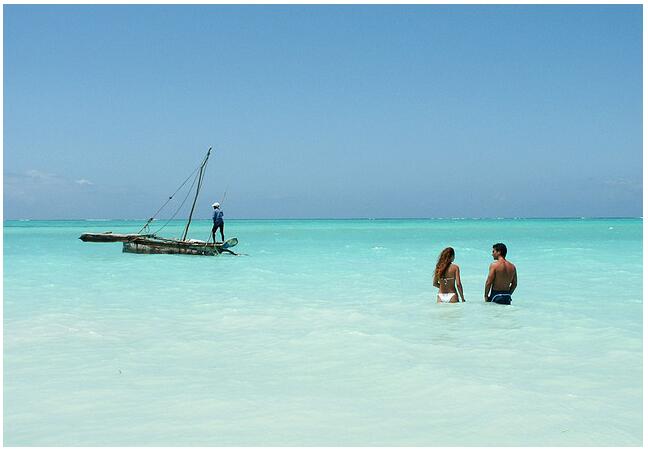 6. Sailing on a traditional dhow

Dhows are the traditional sailing ships of East Africa. They have one to three masts and the trapezoidal sails are their main external features. In two places on the island, in Nungwi and Mtoni, the boats are still made by experienced builders – almost always to order. A sailing trip with a dhow is an interesting experience and a change from staying on the beaches.

Some providers offer full-day tours on Zanzibar to the idyllic Menai Bay. There is a very good chance of spotting dolphins along the way. But shorter tours can also be found without any problems, both on the beaches of the hotel resorts and in the capital Stone Town. Particularly popular (and romantic) are of course the sunset tours, while the sun slowly sinks behind the Indian Ocean.

The Jozani Forest was declared a protected area as early as 1974. In 2004 the area was even upgraded to a national park. It is the ancestral home of the colobus monkeys, whose population is endangered. The primates are even on the red list because their habitat is getting smaller and smaller. The colobus monkeys feed primarily on fruits, seeds and leaves and inhabit the trees in the Jozani Forest.

It is one of the last natural rainforests in East Africa. There paths lead through the forest with its imposing eucalyptus and mahogany trees. The so-called Singapore leopards, which were found in this region for a long time, are apparently extinct, as their last sighting dates back to 2002. The Jozani Forest is bordered by the seagrass meadows of Chwaka Bay.

It is not without reason that Zanzibar is known as the “spice island”, so it is hardly surprising that a spice tour is almost a must. Here you will learn many backgrounds and experience first hand how pepper, nutmeg, cloves and vanilla grow under the East African sun. Saffron and cinnamon can also be found on Zanzibar’s plantations, one of which was introduced by the Sultan of Oman.

There are still numerous spice farms in Zanzibar today, but not all of them are open to the public. In order to get a good impression of the diversity, a guided tour with a guide is always worthwhile. The trained staff tell funny anecdotes and present the exotic spices and fruits in an entertaining, short-lived way. The Tangawizi Spice Farm, the Zanzibar Spices and Heritage Center and the Maganga Farm are very popular.

One of the special sights right in Stone Town is of course the Old Fort as the oldest building in the city. The locals also call the fortress Arab Fort or Ngome Kongwe. The massive structure was erected between 1698 and 1701, and over the centuries it found a new purpose over and over again. It was used as a prison, then again as a market and, more recently, as a tennis court.

A good combination is a visit to the Hamamni Persian Bath afterwards. The public baths were built at the end of the 19th century and were in operation until 1920. They were called “Persian” because their construction was transferred to the Shirazi ethnic group, who originally lived in Persia. The Hamamni Persian Bath once offered hot and cold baths.

At high tide, the waves of the Indian Ocean slosh over the basins of the Mnarani Natural Aquarium. It is located near the lighthouse on the northernmost tip of the main island and does a lot to preserve the endangered sea turtles. In the aquarium, the employees try to ensure a natural environment for the turtles and to cherish and care for the hatched young animals.

When they reach the age of ten months, the young animals are given over to the Indian Ocean. For the residents of the small village of Nungwi, this is always a suitable occasion for a big festival with traditional music, dancing and singing as well as many delicacies. Vacationers are also always welcome to join this unforgettable experience. 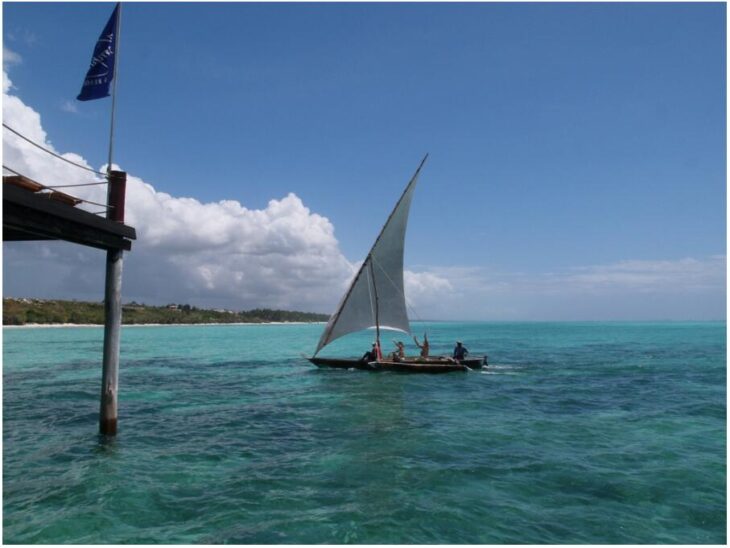